At a race weight of 6.25 tons, the trick Pratt & Whitney R-4360-63 powered T.20 Sea Fury “Dreadnought” is truly the big kid on the air racing block. Built, owned, and flown by the late Frank and sons Brian and Dennis Sanders, this two-seat masterpiece has turned the pylons as fast as 458.9 mph by virtue of the clean, highly detailed airframe and the 3,800 horses that tread within her custom cowling. Dreadnought has won the National Championship Reno Air Races twice, and finished second 13 times. To simply call this airplane large and fast, while certainly accurate, diminishes the fantastic complexity required to attain such impressive performance. If you could examine a single second of time while Dreadnought is hard at work, engine at 3000 rpm and 72 inches of manifold pressure, just 70 feet off the deck at 450 mph on the Reno course, what would you find? 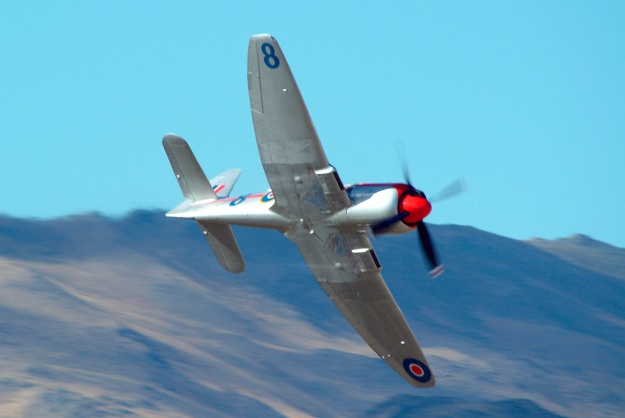 In that one second, the thundering, 4,290 lb R-4360 radial has gone through 50 revolutions, with each of the 28 finely-finned cylinders firing 25 times. Inside each cylinder of 156 cubic inch (2.6L) displacement (same as the entire V-6 powerplant in a C class Mercedes-Benz) a piston the diameter of a coffee saucer has transmitted close to 140 horsepower to the master rod. Seven cylinders drive each crankpin through one master and six link rods, with each of the four crankpins transmitting 900+ horsepower to the crankshaft. Seven hundred power pulses, one pulse for each 9.5° of propeller arc, have been transmitted to the six foot long, one-piece, forged, four throw steel crankshaft. Each piston has traveled 50 feet in linear distance, changing direction 100 times per second, with the total linear travel of all 28 pistons adding up to a ¼ mile. Each sodium-filled exhaust valve the diameter of a beer can (2.5 inches) has required 2.1 tons of initial force to open the port to expel the 1600° F gasses into the 14 exhaust stacks specifically choked to maximize jet thrust from the exhaust. The single-stage supercharger rotor, 14 inches in diameter, has spun 348 times, delivering 98 cubic feet of air at 72 inches of manifold pressure, equivalent to 21 psi above ambient pressure. Seven intake trunks, 2.75 inches in diameter, undulate forward from the supercharger housing to supply the compressed mixture to the intake valves perched atop the forged aluminum heads. The pressure within each cylinder will approach 235 psi before the four, low tension magnetos on the nose case supply the 1400 sparks per second, 20,000+ volts per spark, to the 56 individual spark plugs that fire off the charge.

In that one second, almost 14 fluid ounces of 115/145 performance number aviation  gasoline have been injected into the gaping Bendix PR-100 carburetor with an intake throat the size of a tool box. Five fluid ounces of anti-detonant water/methanol mixture have been force-fed into the intake system to assure the supercharged mixture, heated by compression, does not exceed 194°F, thereby moderating the charge to burn at the proper rate and at a sub-solar temperature. More than 12,408 BTU’s of heat energy (3.1 million calories) have been released into the engine, enough to raise the temperature of a 55 gallon drum of water 27° F. Approximately 8.6 fluid ounces of water has been sprayed at 35 psi from 14 nozzles placed in the narrow, 3.75 inch gap of the cowling inlet to atomize the fluid and dissipate heat directly from the otherwise air-cooled cylinders. In that thousand milliseconds, approximately 60 lbs of cooling air have entered through the three square feet of inlet area (area of a pizza box), its temperature raised 45° F by ram pressure alone, then cleverly guided by a tapered spinner afterbody, shrouds, hoods, and baffles to flow across the four rows of seven cylinders, expand across the engine, absorb heat, and exit the cowling exhaust chute.

Installation of the R-4360 required a longer cowling to cover the engine and a taller tail to counteract torque.

In that one second, tucked inside the forged aluminum R-4360 nose case, 10 hefty steel planet gears, an inch thick with 23 teeth each, caged in the propeller reduction unit, have spun on their own plain bearings 50 times and orbited inside the ring gear close to 19 times to slow the speed of the propeller relative to the engine. The 13.5 foot diameter, four-bladed Aeroproducts propeller and regulator, some 528 pounds altogether, have made 18.75 revolutions, the tips arcing through 795 feet of linear distance and subjected to 2700 times the force of gravity. Each furnace-brazed, hollow steel propeller blade has a chord (width) of 15 inches and sports a custom contour at the outer trailing edge to reduce tip load vibration as it strains to efficiently convert 900 horsepower into thrust, speed, and victory.

In that one second, the 2 pressure oil pumps have sent 148 fluid ounces, almost 1.2 gallons, of 60 weight, W120 aviation oil at 90 psi through the engine to lubricate and cool the reciprocating symphony, while seven scavenge pumps have collected the oil, circulated it through the dual oil coolers, and back to 30 gallon oil tank. A lonely tablespoon of oil has escaped past the piston rings, burned, and been blown overboard.  Approximately 4.3 fluid ounces of spray bar water have been ejected from 56 ports at 15 psi.; 14 pairs of diametrically opposed ports for each of the two oil coolers, one cooler tucked into each wing root. The spray bar water is directed onto metal tabs welded to the stainless steel spray bar tubing, fracturing the stream and turbulating the mist, essential for removing 270 BTUs of heat per second from the oil.

Dreadnought and Rare Bear on the course at Reno in 2012.

In that one second, over 1.72 million, yes million, foot/lbs of work have been done, enough to raise a 150 lb. man 2.2 miles into the air or lift a 60 ton Abrams battle tank through a football goal post. The mighty aircraft has covered 660 feet, roughly 1.5% of the current 8.48 mile Reno Unlimited course. Each second approximately 2 lbs of fluids are consumed and ejected, reducing the racer’s 45 lbs per square foot takeoff wing loading by 10% at touch down. In that single second, coming off Pylon 6, g force easing, wings almost level, the pilot begins a quick scan of the 9, 2.5 inch diameter analog gauges essential for racing (induction temperature, cylinder head temperature, oil temperature, oil pressure, torque pressure, cylinder head temperature, anti-detonant injection pressure, cylinder cooling spray pressure, fuel flow, oil cooler spray bar pressure, spray bar pressure, oil cooler door position indicator) aligned across the top 2 rows of the panel. The wide eyed but extremely focused pilot, Brian or Dennis Sanders, dodging dust devils, scanning the sky for aircraft and the ground for their shadows, is reassured to find all is well within the thundering juggernaut as it rat races over the mile high desert outside Reno, Nevada.

In just one second of the 535 seconds it takes to complete the 66.9 mile race, man and machine, wind and air, water and oil, speed and gravity, combine to make air racing the most elite motorsport of all. Despite engines and airframes that haven’t been manufactured since 1960, Unlimited-class air racing remains the World’s Fastest Motor Sport, and an experience of sight and sound unique in all of racing. Long live the big iron.

With the cowling removed one can see the tight fit of the R-4360 and the baffles to direct the cooling air over the cylinders.

My thanks to Brian Sanders, Graham White, Pete Law, Bill Pearce, and Hewlett-Packard for their expert and most welcome assistance. – © Tom Fey  8-28-06

One hundred twenty-four seconds on the course with Dreadnought, qualifying for Reno at 449.357 mph in 2009, are captured in the video below. The video was uploaded by warbirdphotos and taken from the Valley of Speed. The vapor seen trailing the aircraft is from the spraybars.