Daimler-Benz was formed in 1926 with the merger of Daimler Motoren Gesellschaft and Benz & Cie. Prior to their merger, both companies produced aircraft engines under the respective names Mercedes and Benz. After the merger, the Daimler-Benz name was used mostly for aircraft engines, and the Mercedes-Benz name was used mostly for automobile production. However, both names were regularly applied to marine engines. For clarity in this article, the name Daimler-Benz will refer to aircraft engines, and the name Mercedes-Benz will refer to marine engines.

The MB 501 shows the close family resemblance to the DB 602, but the engines had Vees of different angles and completely different valve trains. The tubes for the pushrods can be seen on the outer side of the cylinders. Note the two water pumps on the rear sides of the engine.

As Germany began its rearmament campaign in the 1930s, high-performance marine diesel engines were needed to power various motorboats. The Kriegsmarine (German Navy) turned to Mercedes-Benz to supply a series of high-speed diesel engines. These engines were part of the MB 500 series of engines that were based on the Daimler-Benz DB 602 (LOF-2) engine developed to power the LZ 129 Hindenburg and LZ 130 Graf Zeppelin II airships. The 500 series diesel engines were four-stroke, water-cooled, and utilized a “V” cylinder arrangement.

The first engine in the 500 series was the MB 500 V-12. The engine’s two cylinder banks were separated by 60 degrees. The MB 500 used individual steel cylinders that were attached to an aluminum alloy crankcase. About a third of the cylinder was above the crankcase, and the remaining two-thirds protruded into the crankcase. This arrangement helped eliminate lateral movement of the cylinders and decreased vibrations. The crankcase was made of two pieces and split horizontally through the crankshaft plane. The lower part of the crankcase was finned to increase its rigidity and help cool the engine oil.

The crankcases of the wrecked MB 501 engines on Crackington Haven Beach have completely dissolved over the years from constant exposure to salt water. Only the engine’s steel components remain. Note the fork-and-blade connecting rods. The engine’s gear reduction can be seen on the left side of the image. (gsexr image via 350z-uk.com)

Each cylinder had two intake and two exhaust valves. The camshaft had two sets of intake and exhaust lobes per cylinder. One set was for normal operation, and the other set was for running the engine in reverse. The fore and aft movement of the camshaft to engage and disengage reverse operation was pneumatically controlled. Bosch fuel injection pumps were located at the rear of the engine and were geared to the camshaft. Each injection pump provided fuel to the cylinders at 1,600 psi (110.3 bar). Fuel was injected into the center of the pre-combustion chamber, which was in the center of the cylinder head and between the four valves. For low-speed operation, fuel was cut from one bank of cylinders.

The MB 500 had a compression ratio of 16.0 to 1. The engine used fork-and-blade connecting rods that rode on roller bearings fitted to the crankshaft. The camshaft also used roller bearings, but the crankshaft was supported by plain bearings. Speed reduction of the engine’s output shaft was achieved through the use of bevel planetary gears. Two water pumps mounted to the rear sides of the engine circulated water through the cylinder banks. Each pump provided cooling water to one cylinder bank. The pumps were driven by a cross shaft at the rear of the engine. The engine was started with compressed air.

With the exception of the different intake manifolds, the MB 502 was nearly identical to the DB 602. Note the Mercedes-Benz emblem on the rear of the V-16 engine.

For more power, the MB 501 was built with two rows of ten cylinders, creating a V-20 engine. The MB 501 was similar to the MB 500, but it also had a number of differences. A 40 degree angle separated the cylinder banks, and the engine used two camshafts positioned in the upper crankcase, one on each side of the engine. Rollers on the lower end of the pushrods rode on the camshaft. Two pushrods for each cylinder extended up along the outer side of the cylinder bank to operate a set of duplex rocker arms for the two intake and two exhaust valves. The fork-and-blade connecting rods were attached to the crankshaft with plain bearings.

The MB 507 was based on the DB 603 inverted V-12 aircraft engine. Although the engine’s architecture was similar, the MB 507 had a completely different crankcase and reduction gear than the DB 603, and it was not supercharged.

The MB 511 engine on display in the Aeronauticum museum in Germany. Note the finning on the lower half of the crankcase. On the front of the engine (left side of image) is the gear reduction with the supercharger above. The square connection above the engine is for the induction pipe. (Teta pk image via Wikimedia Commons) 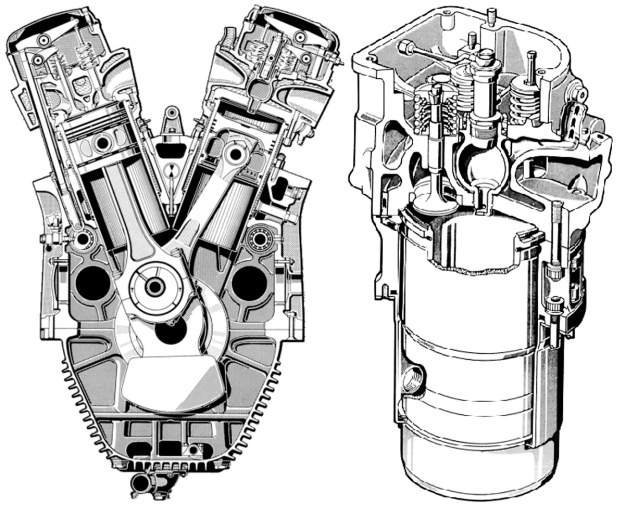 The sectional and cylinder drawing are for the MB 518 but were basically the same for the MB 501 and MB 511—all were 40 degree V-20 engines with individual cylinders. Note the pre-combustion chamber, valve train, and two camshafts.

The MB 518 was the last development of the V-20 engines. This image shows the large intercooler installed on the engine’s induction system.

Schnellboot S-130, the only remaining German S-boot from World War II, was originally powered by three MB 511 engines. After the war, S-130 was reengined with two MB 518s, and one MB 511 was retained. S-130 is currently part of the Wheatcroft Collection and undergoing restoration. Four MB 518 C engines for the restoration were obtained from the Arthur of San Lorenzo, formerly known as the S39 Puma and originally built as a German Zobel Class fast patrol boat in the early 1960s.

A number of MB 518 engines under construction show many different details. The lower crankcase half is on the floor, while the upper half is in the engine cradle; note the two camshaft tunnels. The crankshaft and its fork-and-blade connecting rods can be seen. Farther down the line is an engine with cylinder studs installed, and farther still is an engine with studs and pushrod tubes installed.