In 1930, the Bristol Aeroplane Company began to contemplate the future of aircraft engines. Their engine department was run by Roy Fedden, a prolific aircraft engine designer. At the time, Bristol was manufacturing its nine-cylinder, single-row Mercury radial engine that had an output of 510 hp (380 kW) and displaced 1,519 cu in (24.9 L). The Mercury engine was under continuous development to increase its output. However, to produce more power out of the same basic engine size, Fedden realized that a second cylinder row was needed. 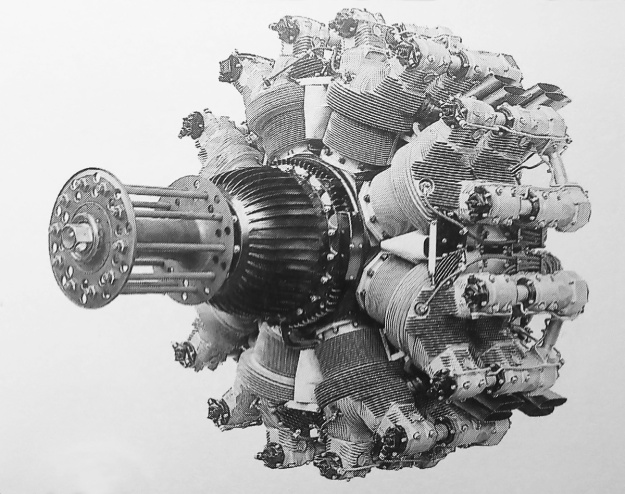 The Bristol Hydra was an odd radial engine utilizing two inline rows of eight cylinders. The engine suffered from vibration issues due to a lack of crankshaft support. Note the dual overhead camshafts for each front and rear cylinder pair.

Fedden and Bristol evaluated at least 28 engine designs to determine the best path forward for a multi-row engine. At the same time, Fedden was investigating a switch to using sleeve valves, but their development at Bristol had just begun. The multi-row engine would continue to use poppet valves. At the end of 1931, a 16-cylinder, air-cooled engine design was selected for development. This engine was called the Double Octagon or Hydra.

The Bristol Hydra was designed by Frank Owner in 1932, and the project was overseen by Fedden. The radial engine was very unusual in that it had an even number of cylinders for each row. Nearly all four-stroke radial engines have an odd number of cylinders per row so that every other cylinder can fire as the crankshaft turns. In addition, the Hydra’s cylinder rows were not staggered—the first and second rows were directly in line with each other. The “Double Octagon” name represented the engine’s configuration, in which the eight cylinders on each of the engine’s two rows formed an octagon. The name “Hydra” was given to the engine because of its numerous “heads” (cylinders). 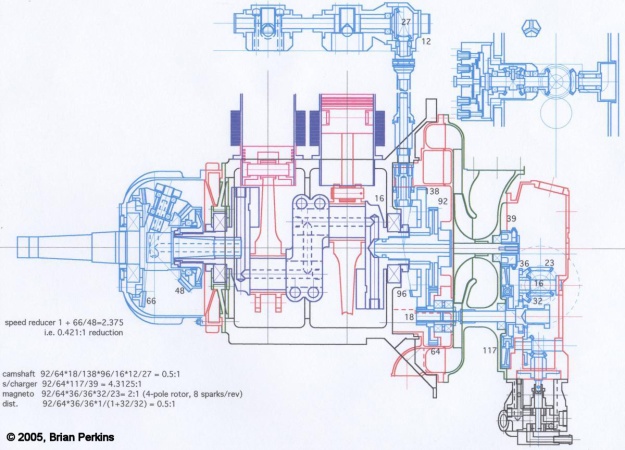 A sectional view of the Hydra created by Brian Perkins and based on a drawing found in the Bristol archives. The numbers in the drawing relate to the number of gear teeth. Note the unsupported crankshaft center section that joined the front and rear crankshaft sections. (Brain Perkins drawing via the Aircraft Engine Historical Society)

Unlike a traditional radial engine, the Hydra’s design resembled four V-4 engines mounted to a common crankcase and using a common crankshaft. In fact, a V-4 test engine was built to refine the Hydra’s cylinder and valve train design before a complete engine was built. The V-4 cylinder sections were mounted at 90-degree intervals around the crankcase, and their cylinders had a 45-degree bank angle. This configuration spaced all cylinder banks at 45-degree intervals. The V-4 cylinder sections had their exhaust ports located on the outer sides and their intake ports positioned in the Vee of each V-4 cylinder section. Two supercharger-fed intake manifolds delivered air to the Vee of each V-4 cylinder section, with each manifold servicing one front and rear cylinder. The engine’s supercharger turned at over four times crankshaft speed.

The Hydra used an aluminum cylinder that was machined all over with cooling fins. A steel barrel lined the inside of the cylinder. Each cylinder had one intake and one exhaust valve. Each front and rear cylinder formed a pair, and each cylinder pair had separate overhead camshafts that directly operated the intake and exhaust valves. At the rear of the cylinder pair, the exhaust camshaft was driven via beveled gears by a vertical shaft that was powered from the crankshaft by a gear set. A short cross shaft extended from the exhaust camshaft to power the intake camshaft. Each cylinder had two spark plugs.

Front and side view of the Hydra. Note the exhaust stacks protruding slightly above the cylinders.

The engine’s crankshaft was built-up from three pieces. The center piece joined the front and rear sections via four clamping bolts. The crankshaft only had two main bearings and no center support. Single-piece master connecting rods were used. A bevel gear reduction at the front of the engine reduced the propeller speed to .42 times that of the crankshaft. The relatively high-level of gear reduction was needed because of the engine’s high operating speed. 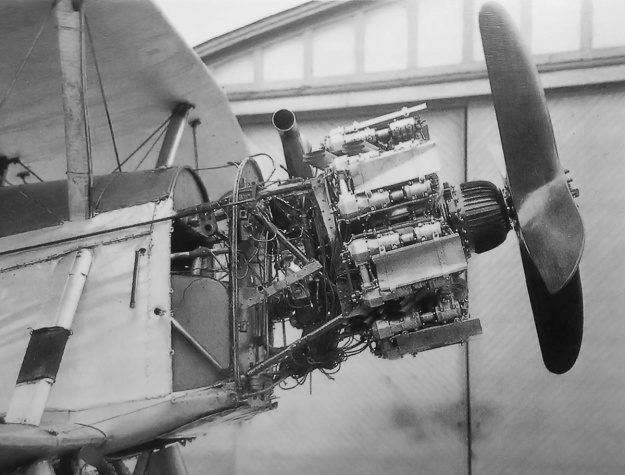 Hydra engine installed in the sole Hawker Harrier. Note the baffling on the engine. The four-blade test club propeller was fitted for ground runs.

The Hydra V-4 test engine underwent runs in mid-1932 and eventually produced around 190 hp (142 kW) with no cooling issues. A complete 16-cylinder Hydra was first run in 1933. Later that year, the engine was installed in the sole Hawker Harrier biplane bomber prototype, J8325. The engine’s configuration made installation very easy, and the intake Vees were baffled to improve cooling airflow.

The Hydra-powered Harrier encountered some oil leaks and ignition issues, but the main trouble was with excessive engine vibration. The lack of a center main bearing on the crankshaft caused the vibration issues, which could be quite severe at certain RPMs. The short stroke of the engine combined with a short crankshaft gave the designers the false hope that the center main bearing would not be needed. A redesign of the engine was required to cure the vibration issues.

The Hydra-powered Harrier completely cowled and with its three-blade flight propeller. The aircraft was flown in this configuration during 1933, but engine vibration issues at critical RPMs limited the testing.

By 1934, the Mercury was approaching the 800 hp (597 kW) level, and the new nine-cylinder, 1,753 cu in (28.7 L) Pegasus was giving every indication that 900 hp (671 kW) was just around the corner. In addition, the sleeve valve, 1,519 cu in (24.9 L) Perseus engine had proved reliable and was producing around 700 hp (522 kW), and more ambitious sleeve valve engines were being designed. Rather than proceed with the Hydra and its double-octagon configuration, Bristol chose to develop its existing production engines and also focus on new sleeve valve engines.

The Hydra engine project was funded entirely by Bristol, although Fedden tried to get Air Ministry support. Only two Bristol Hydra engines were built; remarkably, both are reported to still exist. One is housed at the Sir Roy Fedden Heritage Centre, Bristol Branch of the Rolls-Royce Heritage Trust, in Bristol, United Kingdom. The other engine is stored at the Royal Air Force Museum London, located on the old Hendon Aerodrome. 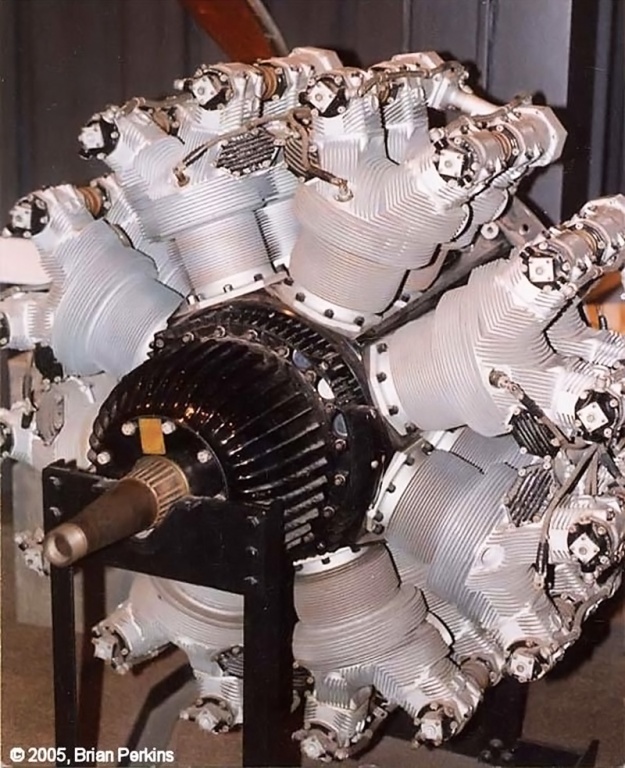 A preserved Bristol Hydra engine held by the Bristol Branch of the Rolls-Royce Heritage Trust. Note the extensive finning on the aluminum cylinders. (Brain Perkins image via the Aircraft Engine Historical Society)

Sources:
– Fedden – the life of Sir Roy Fedden by Bill Gunston (1998)
– British Piston Aero-Engines and their Aircraft by Alec Lumsden (2003)
– An Account of Partnership – Industry, Government and the Aero Engine by George Bulman and edited by Mike Neale (2002)
– “My Wife Calls it an Obsession!!!! Part 2: Bristol Hydra” by Brian Perkins Torque Meter Volume 4, Number 2 (Spring 2005)
“The Future of the Air-Cooled Engine” Flight (25 February 1937)
– http://www.enginehistory.org/ModelEngines/Perkins/Hydra/bristol_hydra.shtml