Giovanni (Gianni) Caproni founded his first aircraft company in 1908. From the start, Caproni and his company leaned toward the production of large aircraft, typically bombers. By 1929, Caproni and engineer Dino Giuliani had designed the world’s largest biplane, the Caproni Ca.90.

The Caproni Ca.90 was a huge aircraft. The aircraft’s tires are taller than the bystanders. Note the servo tab trailing behind the aileron used to balance the aircraft’s controls. Note the radiators for the front engines immediately behind the propellers.

The Ca.90 was conceived as a heavy bomber and was often referred to as the Ca.90 PB or 90 PB. The “PB” stood for Pesante Bombardiere (Heavy Bomber). The aircraft was a large biplane taildragger powered by three pairs of tandem engines. The Ca.90 was built upon lessons learned from the smaller (but still large) Ca.79. The wings, fuselage, and tail were constructed with steel tubes connected by joints machined from billets of chrome-nickel steel. The steel frame was then covered with fabric and doped, except for the fuselage by the cockpit and the aircraft’s extreme nose, which were covered with sheets of corrugated aluminum.

The biplane arrangement of the Ca.90 was an inverted sesquiplane with the span of the upper wing 38 ft 4 in (11.68 m) shorter than the lower wing. The lower wing was mounted to the top of the fuselage so that its center section was integral with the airframe. The upper wing was supported by struts and braced by wires about 18 ft 8 in (5.7 m) above the lower wing. The ailerons were on the lower wing only. All control surfaces were balanced, and the ailerons and rudder featured servo tabs to assist their movement. The design of the control surfaces and the cockpit layout enabled the aircraft be flown by just one pilot. The open, side-by-side cockpit was located just before the leading edge of the lower wing. Access to the fuselage interior was gained by a large door on either side of the aircraft below the cockpit. 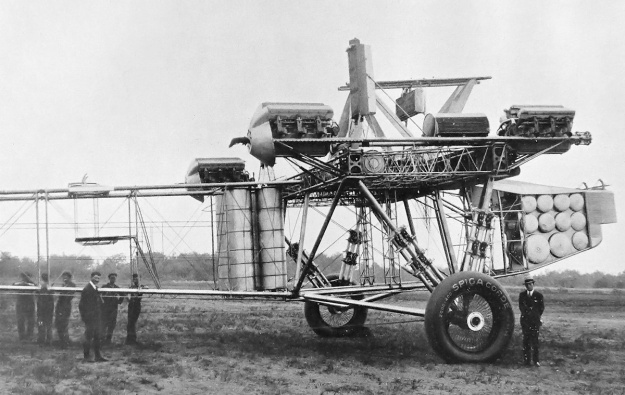 The partially finished airframe of the Ca.90. The cylindrical tanks are for fuel, with 11 in the nose, one visible in wing center section, and four vertically mounted between the rear engines. The open space in the middle of the fuselage is the bomb bay. An oil tank can be seen between the engines. The radiator for the rear engine is in place. Note the radiator under the struts for the center engines.

The Ca.90 was powered by six Isotta Fraschini Asso 1000 direct-drive engines. The Asso 1000 was a water-cooled W-18 engine that produced 1,000 hp (746 kW). The six engines were mounted in three push-pull pairs. A pair of engines was mounted on each wing just above the main landing gear. Another pair of engines was mounted on struts midway between the upper and lower wings. The front engines all had radiators mounted behind their propellers. The rear, wing-mounted engines had radiators attached to wing-support struts. The rear-facing center engine had its radiator positioned under the suspended engine gondola. All radiators had controllable shutters to regulate engine temperature. Engine oil tanks were positioned between each engine pair. The front engines turned two-blade propellers, and the rear engines turned four-blade propellers. All propellers had a fixed pitch and were made of wood.

The bomber was protected by seven gunner stations: one in the nose, one atop the upper wing, two in the upper fuselage, one on each side of the fuselage, and one in a ventral gondola that was lowered from the fuselage. However, it appears only the nose, upper wing, and upper fuselage stations were initially completed, with the side stations completed later. It is doubtful that machine guns were ever installed. The Ca.90 was designed to carry up to 17,637 lb (8,000 kg) of bombs in an internal bomb bay that was located behind the cockpit.

Close-up view of the Ca.90’s nose illustrates the corrugated aluminum sheets covering the nose, fuselage under the cockpit, and top of the fuselage between the nose and cockpit. Note the large access door. The three holes under each engine are carburetor intakes.

The aircraft’s fuel was carried in 23 cylindrical tanks—11 tanks were positioned between the nose gunner station and the cockpit; eight tanks were located in the lower wing center-section just behind the cockpit; and four tanks were immediately aft of the bomb bay. The aircraft was supported by two sets of fixed double main wheels. The strut-mounted main gear was positioned below the wing-mounted engines. The main landing gear was given a wide track of about 16 ft 3 in (8 m) to enable operating from rough ground. The main wheels were 6 ft 7 in (2.0 m) in diameter and 16 in (.4 m) wide. The tailwheel was positioned below the rudder.

The Ca.90 in its final form with a (blue) painted nose, side gunner positions, and aerodynamic fairings for the main wheels. Note the dorsal gunner positions in the upper fuselage, and the new servo tab on the rudder. Another Caproni aircraft (Ca.79?) can be seen flying in the background.

The aircraft was passed to the 62ª Squadriglia Sperimentale Bombardamento Pesante (62nd Heavy Bombardment Experimental Squadron) for further testing. Around this time, the aircraft was repainted, side (waist) gunner positions were completed, and aerodynamic fairings were added to the main wheels.

Italo Balbo, head of the Ministero dell’Aeronautica (Italian Air Ministry), was not a supporter of large-scale bombing using heavy bombers and did not pursue the Ca.90. Caproni had proposed that the aircraft could be reconfigured to cover long-distance international routes as a transport with up to 100 seats or as a mail plane, but no conversion took place. An attempt to market the Ca.90 in the United States was made under a joint venture with the Curtiss Airplane and Motor Company, but the Great Depression had curtailed military spending, and there was little interest in the aircraft. A flying boat version was designed and designated Ca.91, but this aircraft was never built. Only one Ca.90 prototype was built, and it remains the largest biplane ever flown.

A rare image of the Ca.90 airborne shortly after takeoff. A slight trail of dark smoke is visible from the engines, perhaps from a rich mixture. 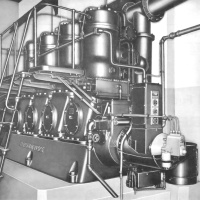