French engineer René Louis Riout was interested in ornithopters—aircraft that used flapping wings to achieve flight. His first ornithopter, the DuBois-Riout, was originally built in 1913, but testing was delayed because of World War I. The aircraft never achieved sustained flight and was destroyed in an accident in 1916.

The nearly-finished Riout 102T Alérion is just missing the fabric covering for its wings and tail. Note the wing structure and how the spars are mounted to the fuselage.

After the war, Riout designed a new ornithopter that had two sets of flapping wings. He continued to refine his ornithopter design, but no one was interested in producing such a machine. Riout worked for a few other companies, including a time with Société des Avions Bernard (Bernard Aircraft Company) from 1927 to 1933. While at Bernard, Riout was involved with their Schneider Trophy racer projects.

In 1933, Riout presented his ornithopter designs and research to the Service Technique de l’Aéronautique (STAé or Technical Service of Aeronautics). Riout’s presentation included designs and models of two- and four-wing ornithopters. The models weighed 3.5 and 17.6 oz (100 and 500 g) and performed flights up to 328 ft (100 m). As a result of these tests, STAé ordered a 1/5-scale model with wings powered by an electric motor.

Completed, the Riout 102T ornithopter resembled a dragonfly. An engine cylinder and its exhaust stack can be seen behind the rear wing. Note the enclosed cockpit; the rear section slides forward for entry.

The 1/5-scale model was built in 1934. From 11 November 1934 to 1 February 1935, the model underwent 200 hours of testing in the wind tunnel at Issy-les-Moulineaux, near Paris, France. The successful tests established the feasibility of Riout’s design and indicated the ornithopter would be capable of 124 mph (200 km/h) if it were powered by a 90 hp (67 kW) engine. Based on the test results, STAé ordered a full-scale ornithopter to be built and tested in the wind tunnel for research purposes. On 23 April 1937, Riout was awarded a contract for the construction of an ornithopter prototype.

The ornithopter was designated Riout 102T Alérion. The word alérion, or avalerion, is the name of a mythical bird about the size of an eagle. The single-place ornithopter had a cigar-shaped fuselage. Its frame was made of tubular-steel and skinned with aluminum. The enclosed cockpit occupied the nose of the aircraft. Two wheels on each side of the aircraft retracted into the fuselage sides. The landing gear had a 4 ft 3 in (1.3 m) track.

Behind the cockpit were two pairs of flapping wings. The two-spar wings had metal frames and were fabric-covered. A hinge at each spar mounted the wing to a large structure in the center of the fuselage. Immediately behind the wings, a 75 hp (56 kW) JAP (John Alfred Prestwich) overhead valve V-twin engine was installed with its cylinders exposed to the slipstream for air-cooling. The exact engine model has not been found, but the 61 cu in (996 cc) JAP 8/75 is a good fit. The 102T ornithopter had conventional vertical and horizontal stabilizers that were made of tubular steel frames and covered with fabric.

On 12 April 1938, the wings of the 102T failed during a wind tunnel test. Stronger wings could have been designed and fitted, but the impractically of the ornithopter left little incentive to do so. The landing gear was removed for the tests. Note the engine cylinder behind the rear wing.

A drawing indicated the wings had 50 degrees of travel—40 degrees above horizontal and 10 degrees below. However, a detailed description of how the wings were flapped has not been found. The method appears to be somewhat similar to the system used on the DuBois-Riout ornithopter of 1913, in which the engine was geared to a crankshaft that ran between the wings. A connecting rod joined each wing to the crankshaft, but each wing was on a separate crankpin that was 180 degrees from the opposite wing. However, images of the 102T show both sets of wings in the up position, as well as one set of wings up and the other down. If a crankshaft was used for the wings, it must have employed clutches and separate sections for each pair of wings. It appears the standard operating configuration was for the wings to be on different strokes: one pair up and one pair down. Wing warping was used to achieve forward thrust, with the portion of the wing behind the rear spar moving.

The aircraft was built in Courbevoie, at the company of coachbuilder Émile Tonnelline (often spelled Tonneline). Final assembly was completed in late 1937 by Bréguet (Société des Ateliers d’Aviation Louis Bréguet or Luis Bréguet Aviation Workshop) in Villacoublay. With its four wings and side-mounted landing gear, the completed ornithopter resembled a dragonfly.

Restoration efforts provide a good view of the Riout 102T’s frame. Note how neatly the landing gear folded into the fuselage. The ornithopter’s aluminum body was saved, but the original wings were lost. (Shunn311 image via airport-data.com)

After some preliminary testing, the 102T was moved to the wind tunnel at Chalais-Meudon in early 1938. First, tests lasting two minutes with the wings stationary were conducted. These tests were followed by wing flapping tests. Eventually, the ornithopter test sessions lasted a continuous 20 minutes, but all tests were conducted without the wings warping (providing thrust). It was noted that the engine was only producing around 60 hp (45 kW), but the tests were continued. On 12 April 1938, the 102T was in the wind tunnel undergoing a flapping test with a wind velocity of 81 mph (130 km/h). When the engine speed was increased to 4,500 rpm, one wing folded, quickly followed by the other three. The outer third of all the wings bent, with the right wings folding up and the left wings folding down. At the time of the mishap, the ornithopter had operated in the wind tunnel for around three hours and had satisfied initial stability tests.

Before the wings failed, Riout had notified the STAé of some modification he would like to make to the ornithopter. However, there was no interest to fund repairs or continue the project after the aircraft was damaged. The damaged wings were discarded, but the fuselage of the 102T was somehow preserved. Today, the Riout 102T Alérion is undergoing restoration and is on display at the Espace Air Passion Musée Régional de l’Air in Angers, France. While a few manned ornithopters flights have been made, the aircraft type has been generally unsuccessful. 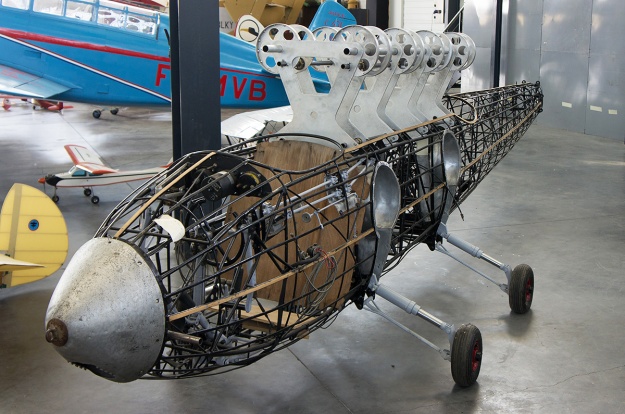 The frame of the ornithopter consisted of small diameter steel tubes that were welded together. The aluminum wing supports may not be original. The Riout 102T is currently on display in the Espace Air Passion Musée Régional de l’Air. (Jean-Marie Rochat image via flikr.com)