At the close of World War II, the United States Navy lacked the ability to carry out a nuclear strike. The nuclear bombs of the time were large and heavy, and no aircraft operating from an aircraft carrier could accommodate the bomb’s size and weight. The Navy did not want nuclear strikes to be the sole responsibility of the Army Air Force (AAF). In addition, the Navy felt that launching an attack with a medium-sized aircraft from a carrier that was hundreds of miles from the target offered advantages compared to large AAF bombers traveling thousands of miles to the target. On 13 August 1945, the Navy sponsored a design competition for a carrier-based, nuclear-strike aircraft. The competition was won by the North American AJ Savage.

Typical example of a production North American AJ-1 Savage, with its R-2800 engines on the wings and J33 jet in the rear fuselage. The intake for the jet was just before the vertical stabilizer and was closed when the jet was not in use.

First flown on 3 July 1948, the AJ Savage was a unique aircraft that spanned the gap between the piston-engine and jet-engine eras. The Savage was powered by two Pratt & Whitney R-2800 engines and a single Allison J33 turbojet that was mounted in the rear fuselage. The jet engine was used for takeoff and to make a final, high-speed dash to the target. In December 1947, before the AJ prototype had even flown, North American Aviation (NAA) proposed an improved version of the Savage that benefited from the continued advancement of turboprop engines. Designated NA-158 by the manufacturer, a mockup was inspected in September 1948, and the Navy ordered two examples and a static test airframe in October 1948—only three months after the AJ Savage’s first flight. The new aircraft was designated XA2J Super Savage, and the two prototypes ordered were given Navy Bureau of Aeronautics (BuAer) serial numbers 124439 and 124440.

Originally, the North American XA2J Super Savage was to be very different from the AJ Savage, but the jet engine in the rear fuselage would be retained. As the project moved through 1949, emphasis was placed on improving the XA2J’s deck performance over that of its predecessor. As a result, the XA2J became an entirely new aircraft but still resembled the AJ Savage. A mockup of the updated XA2J design, the NA-163, was inspected by the Navy in September 1949, and approval was given for NAA to begin construction. 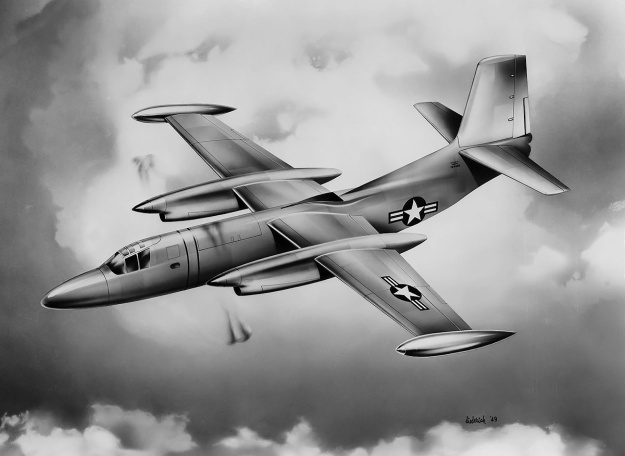 Concept drawing of the XA2J Super Savage from April 1949. Note how the aircraft bears little resemblance to the AJ Savage. The intake for the jet engine can be seen just before the vertical stabilizer. The pilot sat alone under the canopy, and the co-pilot/bombardier and gunner sat in the fuselage, behind and below the pilot.

The XA2J had the same basic configuration as its predecessor but was a larger aircraft overall. The Super Savage was of all metal construction and utilized tricycle landing gear. The high-mounted, straight wing was equipped with a drooping leading edge and large trailing edge flaps. To be brought below deck on a carrier, the aircraft’s wings and tail folded hydraulically. The pressurized cockpit accommodated the three-man crew, which consisted of a pilot, a co-pilot/bombardier, and a gunner. The pilot and co-pilot/bombardier sat side-by-side, and the rear-facing gunner sat behind them. Cockpit entry was via a side door, and an escape chute provided emergency egress out of the bottom of the aircraft. The co-pilot/bombardier was responsible for the up to 10,500 lb (4,763 kg) of bombs stored in a large, internal bomb bay. The gunner managed the radar-equipped tail turret with its two 20 mm cannons and 1,000 rpg. The defensive armament was never fitted to the prototype.

The XA2J did away with the mixed propeller and jet propulsion of the earlier AJ Savage; instead, it relied on two wing-mounted Allison T40 turboprop engines. The T40 engine was made up of two Allison T38 engines positioned side-by-side and coupled to a common gear reduction for contra-rotating propellers. Either T38 power section could be decoupled from the gear reduction, and the remaining engine could drive the complete contra-rotating propeller unit. The engine produced 5,332 hp (3,976 kW) and 1,225 lbf (4.7 kN) of thrust, for a combined output equivalent to 5,850 hp (4,362 kW). The Aeroproducts propellers used on the XA2J had six-blades and were 15 ft (4.57 m) in diameter.

The XA2J Super Savage as built only had turboprop engines. In this image, the wide propellers installed on the aircraft have different cuff styles. Markings on the propeller installed on the right engine would seem to indicate that the propeller (rounded cuff) is being tested. Note the cockpit entry side door and open bomb bay doors.

NAA believed that the Super Savage airframe could be more than just a carrier-based medium bomber. The company developed designs in which various equipment packages could be installed in the aircraft’s bomb bay. The XA2J could be changed into a photo-recon platform with the installation of a camera package. Or the aircraft could become a tanker once it was outfitted with a 1,400 gallon (5,300 L) fuel tank in the bomb bay and a probe-and-drogue refueling system. A target tug system was also designed.

The Super Savage over the desert of California. The Allison T40 engine created trouble for every aircraft in which it was installed. The jet exhaust divider between the T38 engine sections can just be seen at the rear of the engine nacelle. Both propellers installed on the aircraft have square cuffs.

Construction of the first XA2J Super Savage prototype (BuAer 124439) began in late 1949 and progressed rapidly. However, Allison experienced massive technological problems developing the T40 engines, and they were not delivered until late 1951. The XA2J finally made its first flight on 4 January 1952 and was piloted by Robert Baker. The aircraft took off from Los Angeles International Airport and was ferried to Edwards Air Force Base (Edwards) for testing. By the time of the XA2J’s first flight, superior aircraft designs, namely the Douglas A3D (A-3) Skywarrior, were nearing completion. In addition, Allison never solved all of the T40’s issues, and the engines were limited to 5,035 hp (3,755 kW).

Testing at Edwards revealed some difficulties with the Super Savage. All aircraft powered by the complex T40 experienced numerous power plant failures, and the XA2J was no exception. The Super Savage was around 4,000 lb (1,814 kg) overweight and was never tested to its full potential. The highest speed obtained during testing was just over 400 mph (644 km/h). Even the aircraft’s estimated performance did not offer a significant advantage over that of the AJ Savage already in service. The XA2J project was cancelled in mid-1953, and the second prototype (BuAer 124440) was never completed.

The Super Savage had an aggressive appearance that gave the impression that the aircraft could live up to its name. However, it was outclassed by the Douglas A3D (A-3) Skywarrior and had performance on par with the AJ Savage it was intended to replace. 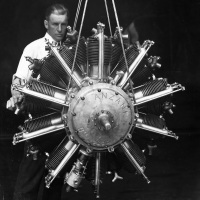 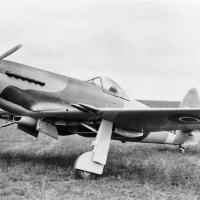