In 1938, the Lockheed Corporation in Burbank, California began design work on a large commercial airliner intended to outperform other transports then in service. Initially known as the Model 44 Excalibur, the aircraft’s design changed as feedback provided by Pan American Airways was evaluated. In 1939, Transcontinental and Western Air (TWA) approached Lockheed in search of an aircraft with performance superior to that of the planned Model 44. Lockheed decided to redesign its airliner based on TWA’s requirements, and the new design became the Model 049 Constellation (originally Model 49 and known as Excalibur A).

The Lockheed Model 1249 was a turboprop-powered Super Constellation originally ordered by the US Navy as the R7V-2. The aircraft was the fastest of the Constellation series by far, but other turboprop and jet aircraft were favored by all parties.

In 1940, the design of the Model 049 was mostly finalized, and three airlines had placed orders for a total of 84 aircraft (30 of these were long-range Model 349s). In May 1941, the United States Army Air Corps ordered 180 Model 349s to be used as transports. Lockheed tooled-up for aircraft production, and construction of the first Model 049 was underway when the United States entered World War II after the bombing of Pearl Harbor on 7 December 1941. With the United States at war, production priorities shifted, and all of the aircraft intended for the airlines would be completed as C-69s, the military designation for the Model 049/349.

Installation of the Pratt & Whitney T34 turboprop engines onto the Super Constellation airframe was well-executed. The tight-fitting cowling was much smaller than those needed to cover the larger-diameter R-3350 piston engine. The aircraft’s main gear was unchanged, which resulted in an awkward hump under the No. 2 and 3 engines. Note the wide cord of the three-blade propeller.

The first R7V-2 (BuNo 131630) seen on a test flight without the wingtip fuel tanks. The Constellation-series of aircraft is known as one of the more graceful airframes, and the turboprop engines made the aircraft that much more impressive.

The US Navy had been instrumental in supporting Wright’s development of the turbo compound engine, but in the early 1950s, the turboprop engine was making its way onto the aviation scene. In June 1950, Lockheed considered a turboprop-powered Super Constellation airliner as the Model 1149, but the design did not procced. In November 1951, Lockheed proposed to the Navy a turboprop R7V-1 (Model 1049B) powered by Pratt & Whitney T34 turboprop engines. The Navy was interested, and Lockheed proceeded with design work on the turboprop Super Constellation as the Model 1249. The Navy ultimately amended its R7V-1 order to include two airframes converted to turboprop-power. These aircraft were designated R7V-2 by the Navy and carried the Lockheed serial numbers 4131 and 4132 and the Navy BuNos 131630 and 131631.

Side view of the R7V-2 shows the reinforcements on the rear fuselage above and below the large cargo door, which hinged up. The turboprop aircraft used standard Super Constellation fuselages, and most were reused on piston-powered aircraft once their days of testing were over.

Two additional airframes were ordered in May 1953. They carried the Lockheed serial numbers 4161 and 4162 and Navy BuNos 131660 and 131661. In October 1953, BuNos 131660 and 131661 were slated to be completed as YC-121Fs for the Air Force and were also assigned Air Force serial numbers 53-8157 and 53-8158. The YC-121F was the Lockheed Model 1249A. Since the order originated with the Navy, all four turboprop Super Constellations carried the Navy designation R7V-2, with the last two also assigned the Air Force designation. All four aircraft were purely intended to test the serviceability of the turboprop engine.

The Model 1249 was based on the Model 1049B, with a modified wing and new engines. The R-3350-powered Constellations had the engine nacelle’s centerline mounted below the wing. The Model 1249 had the engine nacelle’s centerline mounted above the wing, and the nacelle extended back to the wing’s trailing edge. Exhaust from the turboprop engine was expelled from the back of the nacelle and generated thrust. The Model 1249 could also accommodate removable 600 US gallon (500 Imp gal / 2,271 L) wingtip tanks that were first installed on Navy Super Constellations and later used by airlines. Additional fuselage fuel tanks were fitted, and the landing gear was strengthened.

The second YC-121F, Air Force serial number 53-8158, seen with flaps and gear extended. Note the exhaust outlet at the rear of the engine nacelles.

In late 1956, BuNo 131631 was loaned back to Lockheed as an engine testbed for the L-188 Electra airliner and later the P-3 Orion maritime patrol aircraft. At the time, BuNo 131631 had accumulated 120 hours of operation. Rohr Aircraft in Chula Vista, California removed the T34 engines and replaced them with Allison 501-D (T56) engines in new nacelles intended for the Electra. The 501-D produced 3,460 shp (2,580 kW) and 726 lbf (3.23 kN) of thrust, for a total of 3,750 eshp (2,796 kW) for takeoff power. The engines turned four-blade Aeroproducts 606 propellers that were 13 ft 6 in (4.11 m) in diameter. The modified aircraft was nicknamed ‘Elation,’ a combination of Electra and Constellation. Elation made its first flight in July 1957 and was used until July 1959 when it was damaged at Palmdale, California. With 882 hours, BuNo 131631 was delivered to NAS Litchfield Park. In May 1960, the aircraft was sold to California Airmotive. The fuselage and some other parts were used to rebuild 1049G Super Constellation N7121C, and the remainder was scrapped. N7121C went through various air cargo owners until it was scrapped in March 1968. 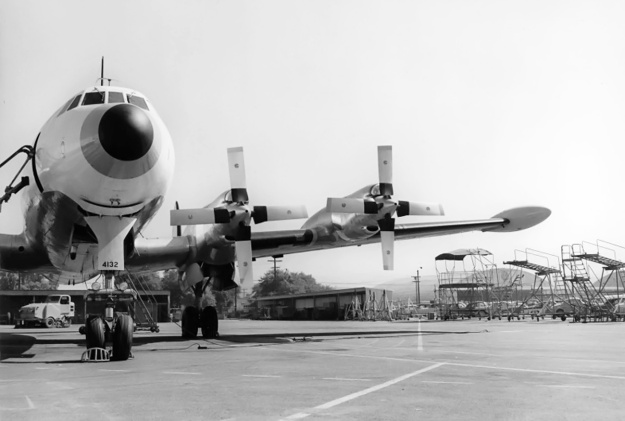 Lockheed serial 4132, the second R7V-2 (BuNo 131631), fitted with Allison 501-D engines to test their installation for the L-1888 Electra. Known as the Elation, the aircraft flew more with the Allisons than it did with its original Pratt & Whitney engines. Note the four-blade propellers.

Along with the military versions, Lockheed had designed a turboprop Super Constellation airliner in 1952 designated as the Model 1249B. The aircraft was planned to have a maximum speed of 451 mph (726 km/h) and a maximum range of 4,125 miles (6,639 km). However, the 1249B was not pursued, and the L-188 Electra eventually took its place. 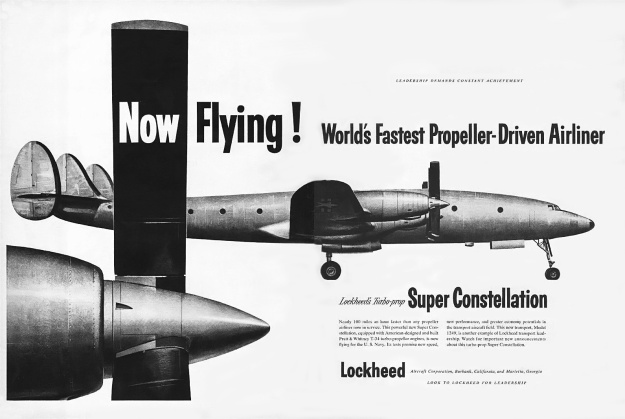 An ad for the turboprop Super Constellation as Lockheed made a light push to interest airlines in the concept. There were no takers, and Lockheed developed the L-188 Electra instead.