Under Junkers engineer Manfred Gerlach, development of the Junkers Motorenbau (Jumo) 224 two-stroke, opposed-piston, diesel aircraft engine began when the development of the Jumo 223 stopped in mid-1942. The Jumo 223 had encountered vibration issues as a result of its construction, and its maximum output of 2,500 hp (1,860 kW) fell short of what was then desired. More power was needed for the large, long-range aircraft on the drawing board.

Front and side sectional views of the Junkers Jumo 224 engine. Note in the side view how the turbochargers feed the supercharger/blower mounted in the “square” of the engine. The front of the crankshafts engage gears for the propellers, supercharger, and fuel injection camshafts.

The Jumo 224 retained the same basic configuration as the Jumo 223, with four six-cylinder banks positioned 90 degrees to each other so that they formed a rhombus—a square balanced on one corner (◇). The pistons for two adjacent cylinder banks were attached to a crankshaft located at each corner of the rhombus. The complete engine had four crankshafts, 24 cylinders, and 48 pistons.

Although never completed, the  Jumo 224 would have closely resembled a larger version of the Jumo 223 shown above.

Exhaust gases from each cylinder bank were collected by a manifold that led to a turbocharger at the rear of the engine. Each of the four cylinder banks had its own turbocharger. After passing through the turbocharger, the air flowed into the supercharger where it was further pressurized, and then into the cylinders via a series of holes around the cylinder’s circumference. As the pistons moved toward each other, the intake holes were covered and the air was compressed. Diesel fuel was injected and ignited by the heat of compression. The expanding gases forced the pistons away from each other, uncovering the intake holes (for scavenging) and then the exhaust ports, which were located near the left and right crankshafts.

At its core, the Jumo 224 was four Jumo 207C inline, six-cylinder, opposed-piston engines combined in a compact package. Using the proven Jumo 207C as a starting point cut down the development time of the Jumo 224 engine. The Jumo 224 used the same bore and stroke as the Jumo 207C. While the Jumo 224 was being designed, a Jumo 207C was tested to its limits to better understand exactly what output could be expected from the Jumo 224. Tests conducted in late 1944 found that with a 200 rpm overspeed (3,200 rpm), intercooling, modified fuel injectors, and 80% methanol-water injection, the Jumo 207C was capable of a 10 minute output at 2,210 hp (1,645 kW)—twice its standard rating of 1,100 hp (820 kW). 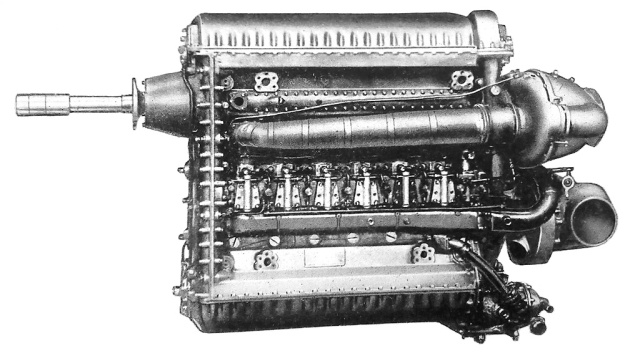 The Junkers Jumo 207C had an integral blower and turbocharger. The engine served as the foundation for the Jumo 224; its cylinder dimensions and various components were used.

From mid-1942 on, design work on the complex Jumo 224 moved ahead but often at a very slow pace. Developmental work on the 24-cylinder Jumo 222 and turbojet Jumo 004 engines took up all of the engineers’ time and Junkers Company resources, leaving little of either for the Jumo 224. The RLM (Reichsluftfahrtministerium or German Ministry of Aviation) was interested in the Jumo 224 engine for the six-engine Blohm & Voss BV 238 long-range flying boat, the eight-engine Dornier Do 214 long-range flying boat, and other post-war commercial and military aircraft projects. Even so, the RLM was more interested in the other Jumo engines, and they were given priority over the Jumo 224. 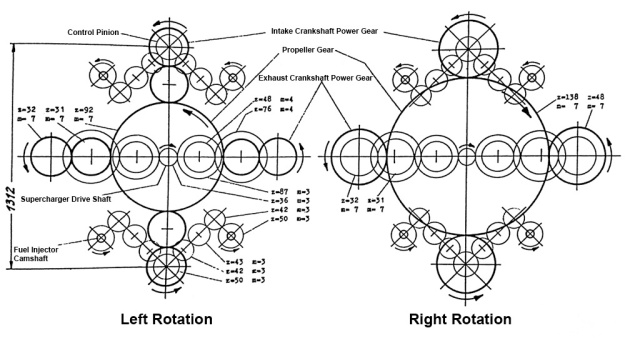 Gearing schematic of the Jumo 224 showing left and right propeller rotation. The drawing indicates the number of teeth (z) and their height (m) on each gear.

In November 1944 the RLM ordered the material for five Jumo 224 engines. At this stage in the war, with streams of Allied bombers overhead, it was nearly impossible for Junkers to find contractors able to produce the specialized components needed for the Jumo 224 engine. Even under ideal conditions, it would be years before the Jumo 224 engine would be ready for production. By the end of the war, the first Jumo 224 engine was around 70% complete. As Allied troops neared the Junkers factory in Dessau, Germany in late April 1945, almost all of the Jumo 224 plans, blueprints, and documents were destroyed to prevent the information from falling into the hands of the Allies.

After the Junkers plant was captured, the Jumo 207C that produced 2,210 hp was sent to the United States for study. The plant, Dessau, and all of eastern Germany was handed over to the Soviet Union. In March 1946, the Soviets expressed interest in the Jumo 224 (and 223) engine, and development continued in May 1946. Gerlach was still at the Junkers plant and continued to oversee the Jumo 224. However, building the engine in post-war, Soviet-occupied Germany proved to be more of a challenge than building the engine during the war. Jumo 224 development continued but at a very slow pace. In October 1946, Gerlach and a number of others were relocated to Tushino (now part of Moscow), Russia to continue work on the Jumo 224.

Installation drawing for the Jumo 224. Clearly seen are the four turbochargers and contra-rotating propellers. The inside cowling diameter is listed as 72.8 in (1.85 m).

No parts or mockups of the Jumo 224 / M-224 are known to exist. The Yakovlev M-501 engine was run in 1952. The engine was not produced for aircraft, but it was built in the 1970s as the Zvezda M503 marine engine and is still used today for tractor pulling. 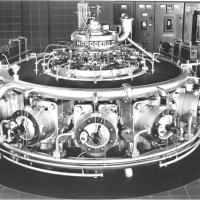